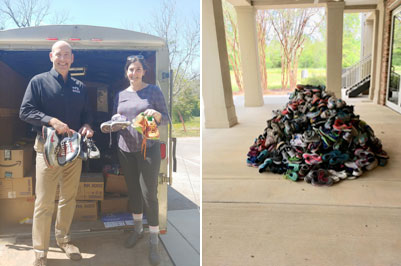 Daphne, AL (April 4, 2019) –Local runners and exercise enthusiasts may have put a lot of miles on old running shoes, but when they are donated to the “Many More Miles” campaign, those shoes will come to life again as they land on the feet of someone who really needs them.

For the 16th consecutive year, Baldwin Bone & Joint, P.C. once again hosted an important community project, “Many More Miles”. Partnering with the local schools, the Port City Pacers, Dr. Glenn Glass and the University of South Alabama Student Recreation Center to collect shoes for the homeless outreach programs of Family Promise of Baldwin County and Wings of Life. Shoe donations for 2019 were accepted January – March 2019.

To all our patients and their families, please know your health and well-being continues to be our top priority. The physicians and staff of Baldwin Bone & Joint are taking extra precautions during this historic COVID-19 (Coronavirus) outbreak, as we continue to accept appointments in all of our clinic locations. We are ready to serve you, and our goal is to keep you as informed as possible.